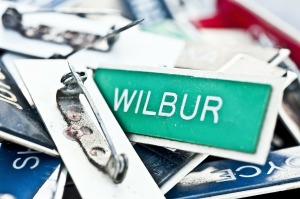 Southern manners are a real thing.  Having lived the last four years in Texas, I heard and became accustomed to titles for everyone.  It was Mr. X or Ms. Y, Mrs. A or Dr. B.  We do our best to impart habits like this to Shiri and have taught her since she was tiny that everyone has a title and deserves to use that title.  But as a rabbi, I know that sometimes our titles can become our names, and a bit of individual identity is lost.  People often resort to calling me “Rabbi” instead of “Rabbi Posen” or “Rabbi Eve.”  While this works in theory, there are many times when I’m not the only rabbi around, and it can be difficult to determine who’s being beckoned.  “Rabbi” without a qualifier like first or last name is like calling out “Mom” or “Dad” in a crowded room; a dozen parents are likely to turn around.  Our titles and names are the way in which we can be easily identified.  They are the personalized method of keeping track of the people we meet and know.

The Torah takes names seriously as well.  Abraham was originally Avram, and Sarah was Sarai until they both had an encounter with God that changed their lives.  Like a bride and groom becoming Mr. and Mrs. or having the title rabbi or doctor bestowed upon you when you earn your degree and start a career, names tell us something about where we are in the world and who we are as people.

Parshat Miketz, the portion of Torah we read this week, again reminds us of the story behind each name we carry and the power it holds.  The parshah is the turning point in the Joseph saga.  Joseph solves Pharaoh’s dreams and becomes a great leader in Egypt.  He then marries, has two sons named Ephraim and Menashe, and the land endures the seven years of plenty and seven years of famine as foreseen.  We know how the story concludes, with Joseph’s brothers coming to Egypt in search of food, and Joseph recognizing them without them knowing who he is.  What we don’t talk about as much is the period of time as Joseph works his way up in Egyptian society to become Pharaoh’s right-hand man.

During this time Joseph is given a new name by Pharaoh.  In chapter 41 the following interaction occurs: “Pharaoh said to Joseph, ‘I am Pharaoh; yet without you, no one shall lift up hand or foot in all the land of Egypt.’ Pharaoh then gave Joseph the name Zaphenath-paneah; and he gave him a wife…”  This new Egyptian name means “God speaks; he lives,” or “creator/sustainer of life.”  Clearly Pharaoh believes that Joseph, a Hebrew name, is not befitting of someone with such power and honor in society.

We’ve seen previous name changes in the Torah, but this is the first instance in Jewish tradition of someone having two names simultaneously – one Hebrew, for religious purposes, and the other secular, representing what Joseph does for the greater society.

We continue a similar tradition today; Jewish children typically receive a Hebrew name and an English name.  The idea is not that we’re two different people, in the same way that Rabbi Posen is not a separate person from Eve.  Rather, the two names represent different parts of who we are to ourselves and to the world.  I am a mother, wife, daughter, sister, and a rabbi, and all of these 24/7.

As we near the closing of the secular year, may we remember that our Jewish and secular lives are not exclusive of each other.  They are intimately woven together, and we rely on both to be full and complete.