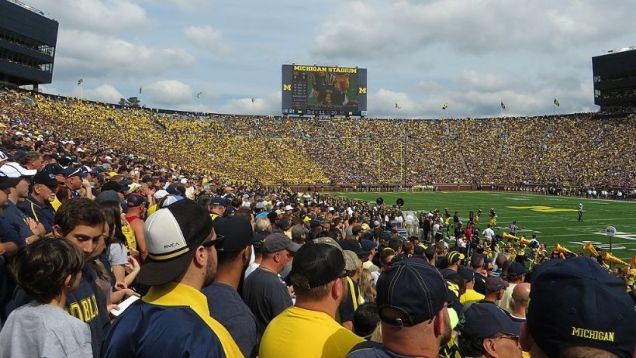 I am not a fan of large crowds. While I love sporting events, concerts, and theme parks themselves, I also have little patience for the slow way crowds move, I worry about the possibility of losing one of my children, and I can do without the loud noise and chaos. In college at the University of Michigan, the announcer at every home game congratulated us for being a part of the largest live crowd watching a football game in America. Being a part of a crowd of 115,000 or more each game day was equal parts exhilarating and exhausting for me. I always arrived early so I could find my seat, avoid the mad rush at the ticket check, and use the bathrooms before they got awfully dirty. And I always left before the end of the game to beat the mass of people walking back to campus, especially the slower ones who always seemed to get even slower amid the chaos.

Despite my aversion to large crowds, I can’t deny their incredible energy and their power to cause change. This week we read from Parshat Bamidbar, the beginning of the fourth book of the Torah. This text brings us to the accounting of the people, showing us who each of the tribes are, what numbers they hold at this particular moment, and the flag representing their territory. This is the beginning of a purposefully organized society, a big change from the free-flow of wandering in the wilderness and an even bigger change from the tight restrictions of slavery.

The text begins by listing the leaders of each tribe and the census of the people. There are 603,550 eligible males over the age of 20 counted. This number is identical to the census taken earlier in their first year in the wilderness. The figure also presupposes a population of more than 2 million supporting itself for 40 years in the Sinai desert. What’s incredible is these people formed a society, took care of one another, and traveled together. If I thought people leaving a football game in a crowd of 115,000 moved slowly, I can only imagine how frustrating this group must have been.

Yet somehow not only did they exist together in the desert, they also listened to each other and to their leader. They organized, supported, and moved together as a community. It might have been overwhelming, but it also must have been invigorating. Though we may not be quite as close in proximity all the time, we are a part of a crowd, whether that crowd is the local Jewish community or people gathered around their televisions to watch a series finale. As we learn this week, it’s not the size of the crowd, but how it supports one another that keeps it thriving and moving (if slowly at times).