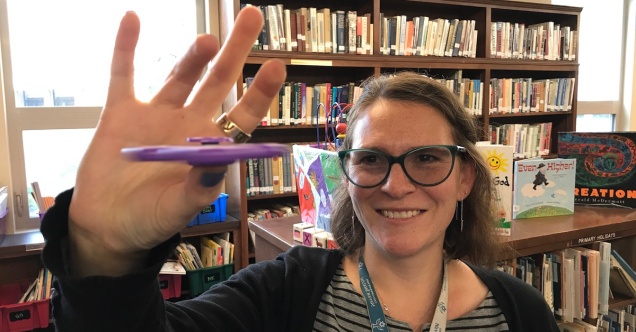 I don’t know if you were aware, but there was a major ruling in Jewish law in May of this year. This may have significant implications regarding your Jewish observance, so I urge you to take note and give serious consideration to the gravity of this decision. This past May, rabbis at the Scientific and Technological Institute for Halacha in Jerusalem determined that fidget spinners do not violate the laws of Shabbat.

Stop the presses. Not the cider press, of course – that’s still happening downstairs, right now. This silent, yet still annoying toy that has become the bane of the PTA is just fine on Shabbat. The explanation is simple – except for the fidget spinners that light up, which are still not allowed – these little devices don’t require any electricity. They’re propelled by your own fingers, and ball bearings provide the smooth, frictionless spin.

You may ask, “Rabbi Eve, there are lots of legal responsa out there. Why do you care about this one?” The answer is because – legal ruling or not – Judaism doesn’t need fidget spinners. We had fidget spinners long before there was anything called a fidget spinner.

I spend a lot of time in my d’vrei Torah and other outlets, like this sermon today, talking about experiencing and living Judaism. Is it any wonder? My masters degree is in experiential Jewish education. It is my mission to show and tell you that you need not be a rabbi to lead a hands-on Jewish life. So much of what we do is literally hands-on.

Using the light of the Havdalah candle on our fingernails to show that we’re close enough to the flame to distinguish different parts of our hands.

And of course there’s the ultimate and original Jewish fidget spinner, the tzitzit. Show of hands – is there anyone like me who recalls sitting in shul when you were little and playing with the tzitzit on your dad’s or grandfather’s tallit? It was only the dads and grandpas back then of course. I have vivid memories of braiding my Papa’s and Zayde’s tzitzit or being wrapped in them in the chilly sanctuary, quietly snoozing while the rabbi gave his sermon. Now that I’m older, I’m somehow both the rabbi and the parent in this story. Even as adults, our fingers naturally and mindlessly drift to those beautiful fringes, which are meant to serve as a reminder of the mitzvot through their knots and string.

There is something about a tactile experience that is strongly associated with learning and memory, and there are some fascinating studies exploring why this is true. Dr. David Linden, a neuroscientist at Johns Hopkins, published some of these findings in 2015 in a book called Touch: The Science of Hand, Heart, and Mind.

In his book, Dr. Linden explains some of the science behind our associations with touch, including the evolution of two distinct parallel pathways for processing the sense of touch. One pathway is responsible for the distinguishing characteristics of an object. Where is this object I’m touching? How much pressure is on it or is on me? What’s the texture of it? In other words, these are the facts about touch. The other pathway is for social and emotional context. This pathway activates the regions in the brain responsible for pleasure and pain and social bonding.

Dr. Linden uses the example of someone putting an arm around your shoulder. It could be the exact same physical stimulation, but imagine the difference in how it feels when it’s a friend, a lover, your boss, someone you don’t really care for . . . in each case the context of the touch affects how that touch registers in your brain.

And the sensations and experiences can stay with us for a long time, especially when the movements are practiced and repeated. Has anyone played an instrument, then stopped for a while, and then years later picked it up again to have your fingers remember what to do seemingly without the help of your active memory? Our sense of smell is usually thought to be the most connected to memory, in that smells instantly and unmistakably trigger signals in our brains that match events and people and places. But our sense of touch is certainly connected intimately to us as well.

Back to the fidget spinner. So if it turns out all along we’ve had Jewish versions of things to occupy our fidgety hands, what can we gain from the groundbreaking ruling that fidget spinners are acceptable, albeit distracting on Shabbos? Perhaps we can learn from the symbolism of the toy more than from the toy itself.

When these little devices peaked in popularity, Chabad published a fun article on their website about finding meaning in fidget spinners. These are life lessons, cleverly viewed through the fidget spinner lens.

First, there’s the notion of momentum. Judaism reminds us that our job is to keep moving forward. Recall the blessings we give a child at birth and bar mitzvah: “May you be privileged to live a life of Torah, chuppah and ma’asim tovim.” We’re always looking forward to the next milestone, commitment, or experience in life. When you engage in community, in Torah, and in learning you find that you’re always in motion in some way.

But before the spinning starts, a fidget spinner needs a good nudge to get moving. A journey of a thousand miles begins with a single step. A Jewish journey begins with a good, old fashioned nudge.

And here’s a fun one. Did you notice that most fidget spinners have three arms? It was King Solomon who noted that a three-stranded rope provides the strongest hold. Likewise, our sages noted that a three-legged stool is sturdiest. Al ha Torah, al ha avodah, v’al gemilut hasadim. The world stands on three things.

Maybe you see a theme here. There’s nothing magical about the toy itself. At the beginning of this craze, there were all these theories that fidget spinners were the answer to ADHD and even helped kids with autism. If they do help you or your child, that’s wonderful. But let’s be realistic; it’s a fad. However, what we do know is that movement is a part of who we are. Movement in general is what science has shown time and again to be beneficial for a wide range of emotional, developmental, and psychological issues. Gross motor activity, exercise, some type of hands-on approach – that’s what is making the difference.

You could say the same about the countless examples we’ve seen over the last few weeks of people responding to Harvey and Irma and the wildfires here in our own state. If you’re providing help – if you’re taking the time to find out what and where the need is and offering even the little bit that you can – no one is going to ask you why you didn’t give more. On the other hand, if you stand by and do nothing, then you’re the one who will be left asking yourself why.

It’s the action of helping that defines us as Jews, and we are all capable of some action, however large or small. It’s the action itself. That’s the message of the fidget spinner. It’s a reminder that the experiential Judaism that I preach is as simple as putting your fingers together to light the the Shabbos candles. The tactile feeling is as attainable as dropping coins into a tzedakah box. And whether or not you’re here every Saturday or you can fit in one daily minyan every third month, it’s about the feeling you get when you run those tzitzit through your fingers. Shanah tovah.